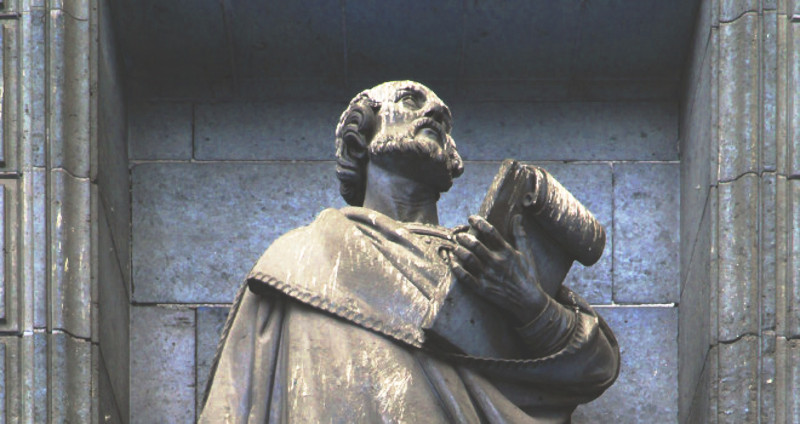 Irenaeus of Lyon (130-202) is widely acknowledged for his emphasis on the unity of God and the history of salvation. Crucial for the salvation of humankind is the humanity of Christ. In the incarnation of Christ humanity is united to God, Christ becoming the head of fallen humanity instead of Adam.

In his polemic against “the heretics” (Gnostics, etc.) Irenaeus in a central passage developed this idea, and emphasized that Christ lived through a common life in order to have all human beings born again. Irenaeus writes:

Being thirty years old when He came to be baptized, and then possessing the full age of a Master, He came to Jerusalem, so that He might be properly acknowledged by all as a Master. For He did not seem one thing while He was another, as those affirm who describe Him as being man only in appearance; but what He was, that He also appeared to be. Being a Master, therefore, He also possessed the age of a Master, not despising or evading any condition of humanity, nor setting aside in Himself that law which He had appointed for the human race, but sanctifying every age, by that period corresponding to it which belonged to Himself. For He came to save all through means of Himself — all, I say, who through Him are born again to God — infants, and children, and boys, and youths, and old men. He therefore passed through every age, becoming an infant for infants, thus sanctifying infants; a child for children, thus sanctifying those who are of this age, being at the same time made to them an example of piety, righteousness, and submission; a youth for youths, becoming an example to youths, and thus sanctifying them for the Lord. So likewise He was an old man for old men, that He might be a perfect Master for all, not merely as respects the setting forth of the truth, but also as regards age, sanctifying at the same time the aged also, and becoming an example to them likewise. Then, at last, He came on to death itself, that He might be the first-born from the dead, that in all things He might have the pre-eminence, Colossians 1:18 the Prince of life, Acts 3:15 existing before all, and going before all. (Against Heresies II.22.4)