From Against the Arians, II.22. 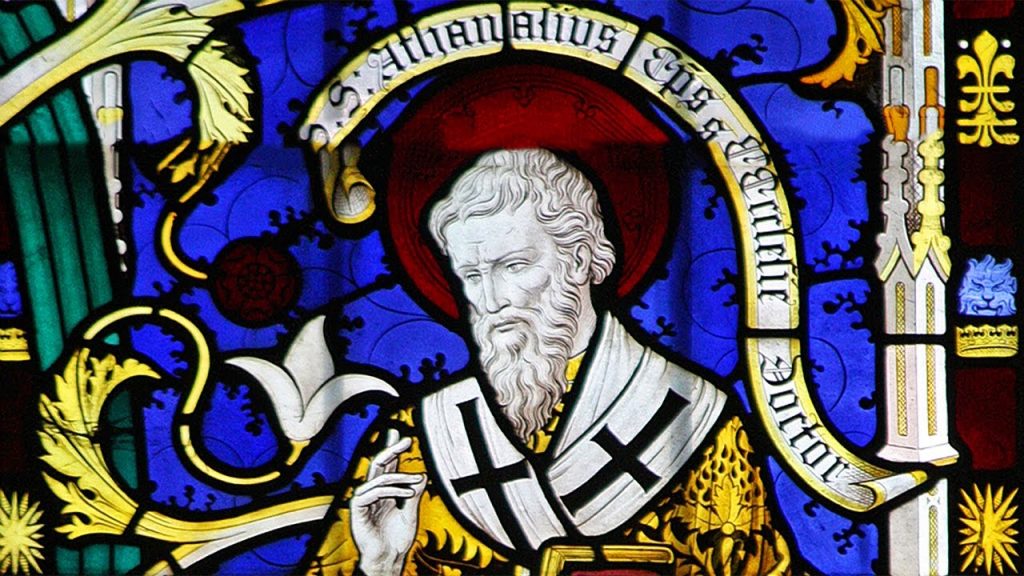 75. Nor let the words ‘before the world’ and ‘before He made the earth’ and ‘before the mountains were settled’ disturb any one; for they very well accord with ‘founded’ and ‘created;’ for here again allusion is made to the Economy according to the flesh. For though the grace which came to us from the Saviour appeared, as the Apostle says, just now, and has come when He sojourned among us; yet this grace had been prepared even before we came into being, nay, before the foundation of the world, and the reason why is kindly and wonderful. It beseemed not that God should counsel concerning us afterwards, lest He should appear ignorant of our fate. The God of all then — creating us by His own Word, and knowing our destinies better than we, and foreseeing that, being made ‘good Genesis 1:31,’ we should in the event be transgressors of the commandment, and be thrust out of paradise for disobedience — being loving and kind, prepared beforehand in His own Word, by whom also He created us , the Economy of our salvation; that though by the serpent’s deceit we fell from Him, we might not remain quite dead, but having in the Word the redemption and salvation which was afore prepared for us, we might rise again and abide immortal, what time He should have been created for us ‘a beginning of the ways,’ and He who was the ‘First-born of creation’ should become ‘first-born’ of the ‘brethren,’ and again should rise ‘first-fruits of the dead.’ This Paul the blessed Apostle teaches in his writings; for, as interpreting the words of the Proverbs ‘before the world’ and ‘before the earth was,’ he thus speaks to Timothy ; ‘Be partaker of the afflictions of the Gospel according to the power of God, who has saved us and called us with a holy calling, not according to our works, but according to His own purpose and grace, which was given us in Christ Jesus before the world began, but is now made manifest by the appearing of our Saviour Jesus Christ, who has abolished death, and brought to light life 2 Timothy 1:8-10.’ And to the Ephesians; ‘Blessed be God even the Father of our Lord Jesus Christ, who has blessed us with all spiritual blessing in heavenly places in Christ Jesus, according as He has chosen us in Him before the foundation of the world, that we should be holy and without blame before Him in love, having predestinated us to the adoption of children by Jesus Christ to Himself Ephesians 1:3-5.’

76. How then has He chosen us, before we came into existence, but that, as he says himself, in Him we were represented beforehand? And how at all, before men were created, did He predestinate us unto adoption, but that the Son Himself was ‘founded before the world,’ taking on Him that economy which was for our sake? Or how, as the Apostle goes on to say, have we ‘an inheritance being predestinated,’ but that the Lord Himself was founded ‘before the world,’ inasmuch as He had a purpose, for our sakes, to take on Him through the flesh all that inheritance of judgment which lay against us, and we henceforth were made sons in Him? And how did we receive it ‘before the world was,’ when we were not yet in being, but afterwards in time, but that in Christ was stored the grace which has reached us? Wherefore also in the Judgment, when every one shall receive according to his conduct, He says, ‘Come, you blessed of My Father, inherit the kingdom prepared for you from the foundation of the world Matthew 25:34.’ How then, or in whom, was it prepared before we came to be, save in the Lord who ‘before the world’ was founded for this purpose; that we, as built upon Him, might partake, as well-compacted stones, the life and grace which is from Him? And this took place, as naturally suggests itself to the religious mind, that, as I said, we, rising after our brief death, may be capable of an eternal life, of which we had not been capable , men as we are, formed of earth, but that ‘before the world’ there had been prepared for us in Christ the hope of life and salvation. Therefore reason is there that the Word, on coming into our flesh, and being created in it as ‘a beginning of ways for His works,’ is laid as a foundation according as the Father’s will was in Him before the world, as has been said, and before land was, and before the mountains were settled, and before the fountains burst forth; that, though the earth and the mountains and the shapes of visible nature pass away in the fullness of the present age, we on the contrary may not grow old after their pattern, but may be able to live after them, having the spiritual life and blessing which before these things have been prepared for us in the Word Himself according to election. For thus we shall be capable of a life not temporary, but ever afterwards abide and live in Christ; since even before this our life had been founded and prepared in Christ Jesus.

77. Nor in any other way was it fitting that our life should be founded, but in the Lord who is before the ages, and through whom the ages were brought to be; that, since it was in Him, we too might be able to inherit that everlasting life. For God is good; and being good always, He willed this, as knowing that our weak nature needed the succour and salvation which is from Him. And as a wise architect, proposing to build a house, consults also about repairing it, should it at any time become dilapidated after building, and, as counselling about this, makes preparation and gives to the workmen materials for a repair; and thus the means of the repair are provided before the house; in the same way prior to us is the repair of our salvation founded in Christ, that in Him we might even be new-created. And the will and the purpose were made ready ‘before the world,’ but have taken effect when the need required, and the Saviour came among us. For the Lord Himself will stand us in place of all things in the heavens, when He receives us into everlasting life. This then suffices to prove that the Word of God is not a creature, but that the sense of the passage is right. But since that passage, when scrutinized, has a right sense in every point of view, it may be well to state what it is; perhaps many words may bring these senseless men to shame. Now here I must recur to what has been said before, for what I have to say relates to the same proverb and the same Wisdom. The Word has not called Himself a creature by nature, but has said in proverbs, ‘The Lord created me;’ and He plainly indicates a sense not spoken ‘plainly’ but latent , such as we shall be able to find by taking away the veil from the proverb. For who, on hearing from the Framing Wisdom, ‘The Lord created me a beginning of His ways,’ does not at once question the meaning, reflecting how that creative Wisdom can be created? Who on hearing the Only-begotten Son of God say, that He was created ‘a beginning of ways,’ does not investigate the sense, wondering how the Only-begotten Son can become a Beginning of many others? For it is a dark saying ; but ‘a man of understanding,’ says he, ‘shall understand a proverb and the interpretation, the words of the wise and their dark sayings Proverbs 1:5-6.’