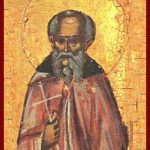 Melito of Sardis (d. c. 180) was bishop of Sardis in Asia minor. In his Easter sermon (On the Passover) Melito explained, among other things, how the Old Testament prefigured the coming and suffering of Christ, the “Passover lamb” who was fully God and fully man. The mystery of Passover, explains Melito, is both new and old, eternal and temporal.

In the final part of his sermon Melito superbly describes how Christ has defeated death by dying himself after being judged for the condemned:

Melito of Sardis On the Passover (excerpts)

1. First of all, the Scripture about the Hebrew Exodus has been read and the words of the mystery have been explained as to how the sheep was sacrificed and the people were saved.

2. Therefore, understand this, O beloved: The mystery of the passover is new and old, eternal and temporal, corruptible and incorruptible, mortal and immortal in this fashion:

4. The law is old, but the gospel is new; the type was for a time, but grace is forever. The sheep was corruptible, but the Lord is incorruptible, who was crushed as a lamb, but who was resurrected as God. For although he was led to sacrifice as a sheep, yet he was not a sheep; and although he was as a lamb without voice, yet indeed he was not a lamb. The one was the model; the other was found to be the finished product.

5. For God replaced the lamb, and a man the sheep; but in the man was Christ, who contains all things.

6. Hence, the sacrifice of the sheep, and the sending of the lamb to slaughter, and the writing of the law–each led to and issued in Christ, for whose sake everything happened in the ancient law, and even more so in the new gospel.

7. For indeed the law issued in the gospel–the old in the new, both coming forth together from Zion and Jerusalem; and the commandment issued in grace, and the type in the finished product, and the lamb in the Son, and the sheep in a man, and the man in God.

8. For the one who was born as Son, and led to slaughter as a lamb, and sacrificed as a sheep, and buried as a man, rose up from the dead as God, since he is by nature both God and man.

10. Such is Jesus Christ, to whom be the glory forever. Amen.

57. Indeed, the Lord prearranged his own sufferings in the patriarchs, and in the prophets, and in the whole people of God, giving his sanction to them through the law and the prophets. For that which was to exist in a new and grandiose fashion was pre-planned long in advance, in order that when it should come into existence one might attain to faith, just because it had been predicted long in advance.

58. So indeed also the suffering of the Lord, predicted long in advance by means of types, but seen today, has brought about faith, just because it has taken place as predicted. And yet men have taken it as something completely new. Well, the truth of the matter is the mystery of the Lord is both old and new–old insofar as it involved the type, but new insofar as it concerns grace. And what is more, if you pay close attention to this type you will see the real thing through its fulfillment.

60. Pay close attention also to the one who was sacrificed as a sheep in the land of Egypt, to the one who smote Egypt and who saved Israel by his blood.

61. For it was through the voice of prophecy that the mystery of the Lord was proclaimed. Moses, indeed, said to his people: Surely you will see your life suspended before your eyes night and day, but you surely will not believe on your Life.     Deut. 28:66.

62. And David said: Why were the nations haughty and the people concerned about nothing? The kings of the earth presented themselves and the princes assembled themselves together against the Lord and against his anointed.     Ps. 2:1-2.

63. And Jeremiah: I am as an innocent lamb being led away to be sacrificed. They plotted evil against me and said: Come! let us throw him a tree for his food, and let us exterminate him from the land of the living, so that his name will never be recalled.     Jer. 11:19.

64. And Isaiah: He was led as a sheep to slaughter, and, as a lamb is silent in the presence of the one who shears it, he did not open his mouth. Therefore who will tell his offspring?     Isa. 53:7

65. And indeed there were many other things proclaimed by numerous prophets concerning the mystery of the passover, which is Christ, to whom be the glory forever. Amen.

5. Deliverance of Mankind through Christ

66. When this one came from heaven to earth for the sake of the one who suffers, and had clothed himself with that very one through the womb of a virgin, and having come forth as man, he accepted the sufferings of the sufferer through his body which was capable of suffering. And he destroyed those human sufferings by his spirit which was incapable of dying. He killed death which had put man to death.

67. For this one, who was led away as a lamb, and who was sacrificed as a sheep, by himself delivered us from servitude to the world as from the land of Egypt, and released us from bondage to the devil as from the hand of Pharaoh, and sealed our souls by his own spirit and the members of our bodies by his own blood.

69. This one is the passover of our salvation. This is the one who patiently endured many things in many people: This is the one who was murdered in Abel, and bound as a sacrifice in Isaac, and exiled in Jacob, and sold in Joseph, and exposed in Moses, and sacrificed in the lamb, and hunted down in David, and dishonored in the prophets.

70. This is the one who became human in a virgin, who was hanged on the tree, who was buried in the earth, who was resurrected from among the dead, and who raised mankind up out of the grave below to the heights of heaven.

III. The Final Triumph of Christ

101. he rose up from the dead, and cried aloud with this voice: Who is he who contends with me? Let him stand in opposition to me. I set the condemned man free; I gave the dead man life; I raised up the one who had been entombed.

103. Therefore, come, all families of men, you who have been befouled with sins, and receive forgiveness for your sins. I am your forgiveness, I am the passover of your salvation, I am the lamb which was sacrificed for you, I am your ransom, I am your light, I am your saviour, I am your resurrection, I am your king, I am leading you up to the heights of heaven, I will show you the eternal Father, I will raise you up by my right hand.

104. This is the one who made the heavens and the earth, and who in the beginning created man, who was proclaimed through the law and prophets, who became human via the virgin, who was hanged upon a tree, who was buried in the earth, who was resurrected from the dead, and who ascended to the heights of heaven, who sits at the right hand of the Father, who has authority to judge and to save everything, through whom the Father created everything from the beginning of the world to the end of the age.