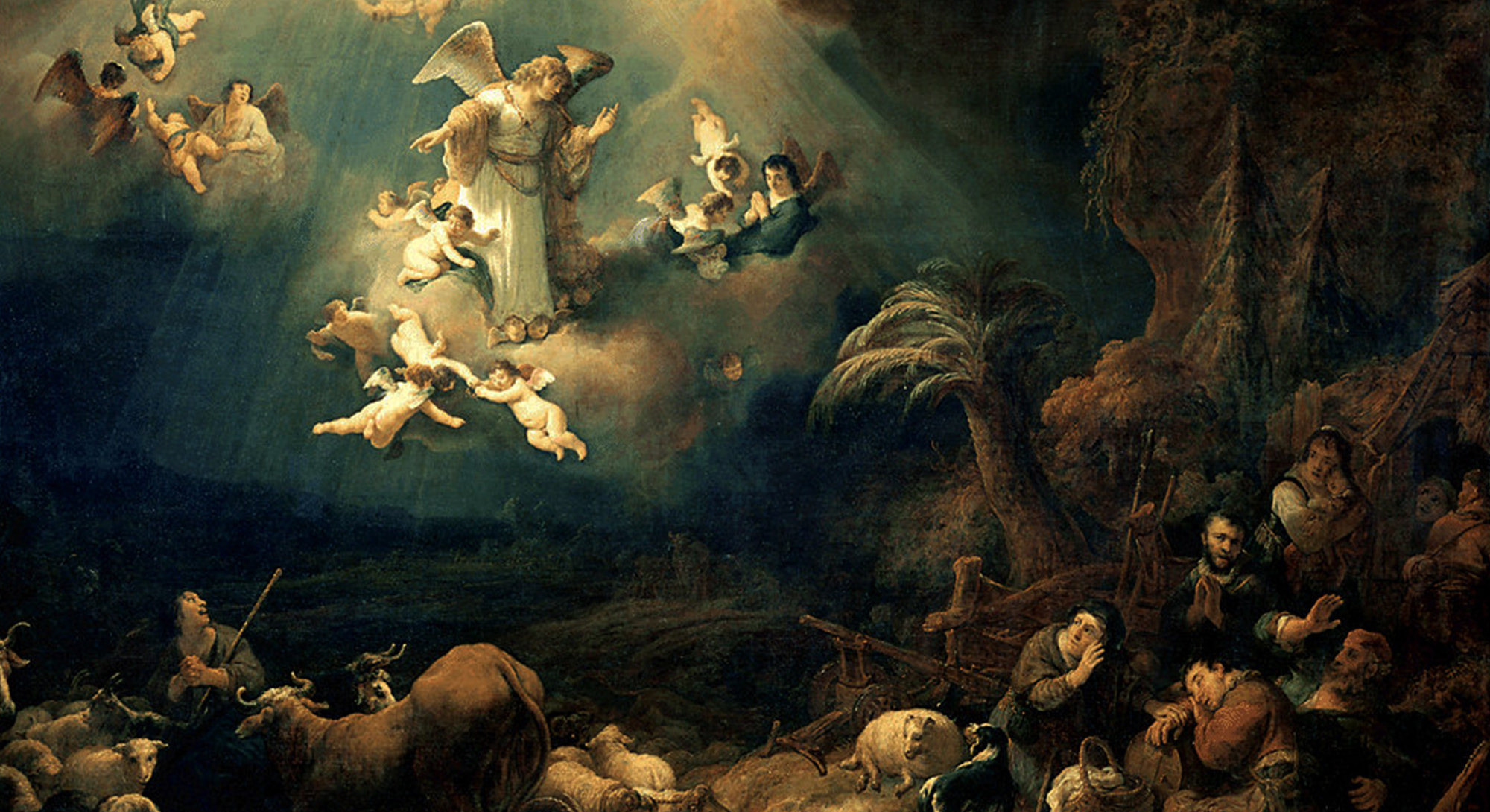 Notes based on a sermon @ Café Grace in Copenhagen.

“And lo, a messenger of the Lord stood over them, and the glory of the Lord shone around them, and they feared a great fear. And the messenger said to them, `Fear not, for lo, I bring you good news of great joy, that shall be to all the people — because there was born to you to-day a Saviour — who is Christ the Lord — in the city of David” (Luke 2:9-11, YLT)

Prayer: Heavenly Father, Jesus Christ, our Lord and savior. We are gathered in your name, and we thank you for being present among us. We pray that you will send your Spirit, and teach us what it means when you tell us not to fear. We have heard that a thousand times, but we still need to understand it, not just with our heads, but also with our hearts. In your name. Amen.

We have often heard that the phrase ‘do not fear’ appears 365 times in the bible. That’s one time for each day in the year. So we know very well that we are not supposed to worry. That we don’t need to. David writes about this in some of his Psalms:

“Even though I walk through the valley of the shadow of death, I will fear no evil, for you are with me; your rod and your staff, they comfort me.” (Psalm 23:4)

But still, David was often frigthened, worried, fearful and full of sorrows. It’s not only Jesus who says ‘my God, my God, why have you forsaken me?’ David also says that once. It seems that often, it doesn’t really help much telling ourselves that we don’t need to worry. David can tell himself that the Lord is his light and salvation, and that he does not need to fear. But when things doesn’t work out, and fear, sorrow and death knocks at our door, we need to hear it from God himself: “Do not fear.”

In the new testament, the first time we hear that we don’t need to fear is perhaps when Jesus is born. Luke tells us about that. The shepherds are sitting in the fields, when suddenly an angel appears before them, with amazing light and sound, and so on. Of course they were scared, but the angel tells them: “do not fear!, I bring you good news that will bring great joy to all people.” Why did Christ come to us as a human being? To free us from the fear of death. Hebrews tells us:

“Seeing, then, the children have partaken of flesh and blood, he himself also in like manner did take part of the same, that through death he might destroy him having the power of death — that is, the devil — and might deliver those, whoever, with fear of death, throughout all their life, were subjects of bondage” (Heb. 2:14-15)

Throughout his ministry Jesus repeatedly told people not to fear. One episode is what we call the ‘transfiguration’, when Jesus brings some of his disciples to the mountain Tabor, up in northern Israel. Suddenly Jesus is surrounded by light, his face is shining, and the disciples see Moses and Elijah, two of the great prophets from the old testament, talking with Jesus. One of Jesus’ disciples, Peter, immediately starts chatting, he says ‘Lord, it is good for us to be here. If you wish, I will put up three shelters—one for you, one for Moses and one for Elijah’. But while he was still speaking, a bright cloud covered them, and a voice said, “This is my Son, whom I love; with him I am well pleased. Listen to him!” (Luke 9:28-36). When the disciples heard this, they fell to the ground, terrified. But Jesus came and touched them: “Get up,” he said. “Don’t be afraid.” When they looked up, they saw no one except Jesus.

In the transfiguration it again becomes clear that Jesus has the authority to say ‘do not be afraid’. From now on, we don’t need the prophets. God himself has told us that it’s Jesus we need to listen to. So what is it that Jesus says? He says: ‘Get up, don’t be afraid!’ He doesn’t say: ‘it’s alright’, or ‘it’s probably not that bad’. He doesn’t start giving us reasons not to worry. No, he commands us to not be afraid! If any random person you met on the street told you that you don’t need to worry, you would shake your head. That’s just silly, what does strangers know about your problems? Maybe you don’t know where to sleep tonight. Maybe you don’t know where to get your next meal. But Jesus commands you: ‘Do not be afraid, do not worry!’. And he can do that, because he is not just anyone, but the son of God. And like a soldier in the army is not expected to ask all kinds of questions about how and why, Jesus don’t expect you to ask ‘why?’. He doesn’t give you all kinds of reasons. That he tells you not to worry is enough.

Not to worry is a commandment. But we still worry. We don’t follow Jesus’ commandment. And that’s the problem. Worrying is not just one of many problems. Worrying is actually at the root of sin itself! You probably remember the story of Cain and Abel? Cain and Abel were brothers. Abel a nomad, Cain a farmer. Abel was doing fine, but not Cain. And out of envy Cain killed Abel. Now God has mercy on Cain, and tells him that he will protect him, on the condition that he will live as a nomad, without a permanent home, just as his brother had done. God leaves a mark in Cain’s forehead, and tells him, that if anyone kills him he will be avenged. You can probably imagine, that Cain was thinking, ‘right, as if that would help me anything, being avenged after I’m killed.’

At any rate, Cain chooses not to follow God’s offer. Cain turns his back on God, and instead of living like a nomad, he builds the first city, Enoch. Enoch means something like ‘a new beginning’. It wouldn’t be strange if Cain was worried to death. Cain worries and builds a city. By building a city, a house with a roof, walls to protect him, he tries to find safety. But by inventing his own protection, he also rejects God’s protection. The bible is full of stories like that, about people who want to rely on what they have and possess and what they can do themselves, instead of on what God gives them. Always having great plans and ideals for the future, instead on relying on God. When we start worrying about what we have, that’s when we start competing about things. That’s when we start judging others. That’s when we start judging ourselves, and finally God. That’s sin. That’s death.

“You cannot serve both God and Mammon. That is why I tell you not to worry about everyday life—whether you have enough food and drink, or enough clothes to wear. Isn’t life more than food, and your body more than clothing? Look at the birds. They don’t plant or harvest or store food in barns, for your heavenly Father feeds them. And aren’t you far more valuable to him than they are? Can all your worries add a single moment to your life? And why worry about your clothing? Look at the lilies of the field and how they grow. They don’t work or make their clothing, yet Solomon in all his glory was not dressed as beautifully as they are. And if God cares so wonderfully for wildflowers that are here today and thrown into the fire tomorrow, he will certainly care for you. Why do you have so little faith? So don’t worry about these things, saying, ‘What will we eat? What will we drink? What will we wear?’ These things dominate the thoughts of unbelievers, but your heavenly Father already knows all your needs. Seek the Kingdom of God above all else, and live righteously, and he will give you everything you need. So don’t worry about tomorrow, for tomorrow will bring its own worries. Today’s trouble is enough for today.”

I think that when those of us, who are well off, hear this, we often hear it as something pretty and sweet. Like: don’t worry, be happy, it’s gonna be alright. Take it easy. But for others, it might rather sound like something that’s hard to believe. But really, don’t we all worry? And if we do, at the end of the day our worries are the same: Whether we worry about small things, like what pants to wear today, or whether we worry about how we will get fed tonight, at the end of our worries is always the same thing – death. Death is the one big worry that it all comes down to, death is the horizon of all our fears. We worry because we are afraid to lose what we have – ultimately our life.

But Jesus knows that we worry. When Jesus tells us not to worry, that’s good news. Jesus knows that his disciples worry, that’s why he tells them not to! But how do we stop worrying? Listen to the gospel: We know, that God knows what it means being a human being. Christ was one of us. He has been through death itself. Do you think he was feeling ‘alright’ when he was hanging on that cross? No! He was scared to death. My God, my God, why have you forsaken me? But by going through death, Jesus also conquered death. He came out on the other side, resurrected, in body and soul.

God is love and has done what it takes to save us from the powers of death. God’s love is no mother’s love. It’s no soft love that protects you from all suffering and harm. He will let you go the same way as Jesus. Through death, at some point. But because of what Jesus did, on the other side of death, there’s life. Even here and now. There is a whole landscape of fear and worries, but beyond the horizon there is something completely new. This is why we do not need to fear – even death.

These notes are based on a sermon in Café Grace in Copenhagen 2013.