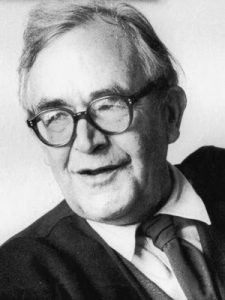 In the Swiss Reformed theologian Karl Barth’s famous doctrine of election, Jesus is the one elect of God, elected to bear our rejection in a way that all human beings are elected in him (Church Dogmatics II.2). This also means that all human beings have been reconciled to God in Christ alone before coming to faith.

In the first volume of the fourth part of his Church Dogmatics – on the doctrine of reconciliation –  Karl Barth argued that the atonement was true and real for all human beings as a result of the work of Jesus Christ. Being truly God and truly human Christ is united to humankind in such a way, that all human beings have kept the covenant with him. The purpose of the atonement was the conversion of the world to God through Christ as the representative of the world.

“The hand of God the Reconciler is over all men. Jesus Christ was born and died and rose again for all. The work of atonement, the conversion of man to God, was done for all. The Word of God is spoken to all. God’s verdict and direction and promise have been pronounced over all. To that extent, objectively, all are justified, sanctified and called. But the hand of God has not touched all in such a way that they can see and hear, perceive and accept and receive all that God is for all and therefore for them, how therefore they can exist and think and live. To those who have not been touched in this way by the hand of God the axiom that Jesus Christ is the Victor is as such unknown. It is a Christian and not a general axiom; valid generally, but not generally observed and acknowledged. Similarly, they do not know their sin or even what sin is, since it can be known only in the light of that axiom. And naturally they do not know their justification, sanctification and calling as they have already taken place in Jesus Christ. But the hand of God has touched and seized Christians in this way – which means the presence and activity of the Holy Spirit. In this special sense Christians and only Christians are converted to Him. This is without any merit or co-operating on their part, just as the reconciliation of the whole world in Jesus Christ is without its merit or co-operation. But they are really converted to God in the special sense. The free grace of the sovereign God has in relation to them the special form that they themselves can reach after it. They can understand it as the grace directed to the world and therefore to them. They can live in the light and power of it – under its judgment, but all in all, under the Word, and readily and willingly under the Word, under the divine sentence and direction and promise. Therefore the being and work of Jesus Christ, the One and All of His achievement and the relevance of it has also this – shall we call it for the sake of clarity subjective? – dimension, in which the same One and All is now in the eyes and ears and hearts, in the existence of these men, Christian, who are specially taken and determined by His Holy Spirit. They have over the rest of the world the one inestimable advantage that God the Reconciler and the event of reconciliation can be to them a matter of recognition and confession, until the day when He and it will be the subject of His revelation to all eyes and ears and hearts, and therefore of the recognition and confession of all men.” (Karl Barth, Church Dogmatics VI.1, §58. p. 149)

Notice that Barth is not here dealing with a general, but merely outward and ineffectual calling, as opposed to an inner and effectual, but particular calling that only the few ‘elect’ will hear for some mysterious reason. In Christ all are elect and called, but the effects of this calling only becomes real subjectively and existentially for each particular person through the work of the Holy Spirit.

There are obvious similarities between Karl Barth’s theology and James Relly’s doctrine of union. Relly similarly confirmed that Christ is the elect one who are united to humankind in such a way that he partakes in the judgment against our sin on the cross in order that we may partake in his righteousness in the resurrection. Being saved by faith means coming to know that one already partakes in the death and resurrection of Christ through our eternal union with him. But where Relly finally took the consequences of this idea and argued that this must also mean that all will finally be saved, Barth was more cautious, as he saw the final salvation of all as something we can only hope for. The above passage at least suggests, however, that the Rellyan conclusion is – should we say – rather plausible from the Barthian perspective as well.