Note: This is a repost of a post from contrafatum.blogspot.com 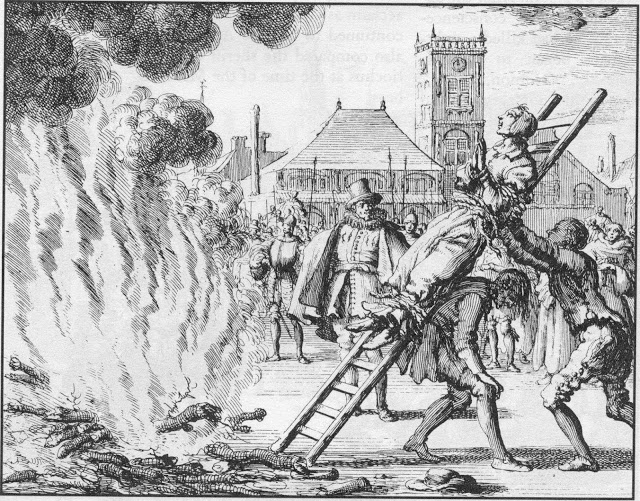 In the Lutheran Augsburg Confession (CA) the so-called Anabaptists were condemned not just for their baptist practices but also for their views on eschatology, soteriology and ethics.

First there is the Anabaptist rejection of violence. The Lutherans condemned the Anabaptists for teaching the necessity of not engaging as soldiers in “just war”, to “sit as judges” and to award “just punishments”.

”They condemn the Anabaptists who forbid these civil offices to Christians.” (CA § XVI)

On soteriology we hear that Lutherans believe that the devil and sinners shall be tortured without end, while the Anabaptists are condemned for teaching that there will be an end to torture:

”They condemn the Anabaptists, who think that there will be an end to the punishments of condemned men and devils.” (CA § XVII)

While the claim that there will be an end to punishments is not necessarily identical to the view that everyone will be saved eventually (they could be, e.g., annihilated instead), there are evidence that at least some anabaptists of the reformation leaned towards the classical Christian doctrine of universal salvation or apokatastasis.

Perhaps, but from a more complex theological perspective it seems that the differing positions result from different views on God’s freedom, or maybe rather, our capability of theorizing God’s freedom.

The problem of ‘just war’ and non-violence

In the Mennonite theologian John Howard Yoder’s celebrated criticism of Karl Barth’s position on “just war”, Yoder pointed out that Barth, on his own premises, had to reject any notion of just war (Yoder, Barth and the Problem of War). According to Barth there is the fundamental commandment of God to Christians against killing.

But since moral principles are not absolute (only God is), God, in his freedom, can demand Christians to act contrary to that commandment, which is why so-called just war is theoretically possible. God’s demand can, however, only occur existentially, and as a call in particular situations. The possibility that God in his freedom demands acting against the commandment of not killing is a Grenzfall.

Now, Yoder, in his correction of Barth, pointed out that exactly because we are talking of killing and participation in war as a Grenzfall that is known only existentially in the particular situation, it can not be theorized as a part of an abstract principle.

It is true that we must allow that God in his freedom can make exceptions to his commandments. Commandments are not absolutes, only God is. But if these exceptions are codified theoretically together with the commandments then we end up exactly with an abstract, absolute principle, though of a more complex kind.

Hence, rather than saying that Christians can participate in just war and so on, we need to stick to the commandment not to kill while accepting that there might be exceptions – but being satisfied with knowing that we only learn of those exceptions existentially and situationally.

Does God desire the death of maybe some sinners?

Now, Yoder’s criticism of Barth kind of reminds me of a basic problem with Luther’s On the Bondage of the Will. In this book Luther rightly criticized Erasmus of Rotterdam for claiming that human beings can contribute to their salvation by the exercise of so-called “free will”. But only God is free, so God sovereignly decides who to save, said Luther. This does not, according to Luther, mean that everyone is saved, though. For while God in the Bible has promised to save the whole world, he is free to do otherwise.

The words “I desire not the death of a sinner” (Ez. 18:30) is true for the preached God who is revealed in his word (WA 684). But they are not true for the hidden God, which is not revealed, says Luther. There are two wills in God, says Luther. As Luther puts it, God “does not will the death of sinner, according to his Word; but he wills it according to that inscrutable will of his.” The point is that God is free to go against what he has revealed. According to Luther “God has not bound himself by his word, but kept himself free over all things.”

Now, besides being a complete denial of the divinity of Jesus Christ, this sounds a whole lot like Barth’s claim that while God has commanded against all killing he is free to make exceptions to that commandment, doesn’t it? My point is that while both Barth and Luther are, of course, right that God is free to act contrary to his revealed word (regarding killing and salvation), this concession does not put us in to a privileged position making us capable of theoretically saying that he actually does.

When the Bible tells us that Jesus died as an atonement not just for our sins, but for the sins of the whole world (1 Jn 2,2), we’d better stick to that.

When Jesus tells us not to kill people, we’d better stick to that.

Solution: Don’t make exceptions to God’s love (or your own for that matter!)

The claim that because God is free to act contrary to his word means that we must necessarily make exceptions to his word is to put ourselves in the position of God.

And, btw., these questions are highly related to the fact that the belief in a God that tortures unbelievers is often seen together with the practice of actually torturing and killing “heretics”, such as the anabaptists, as the magisterial reformers were happy to do.

Actually, it’s pretty simple: God’s love knows no limits and we are to imitate that love without limits. Over and out.