John Wesley Hanson was an American Universalist minister and historian.

He was born in Boston. In 1845 he became a minister in Wentworth, New Hampshire. In the 1860s he was chaplain to the Sixth regiment of Massachusetts volunteers. In the 1870s he went as a missionary to Britain, becoming the pastor of St. Paul’s Universalist Church, Glasgow, Scotland. He then became minister of the Universalist New Covenant Church of Chicago.

Hanson published his own translation of th New Testament, Hanson’s edited New Testament (1885), a revision of the English Revised Version with “baptism” changed for “immersion” and other changes.

Hanson is best known for arguing that universalism dominated early church thought before Augustine. Hanson’s reading of church history has been challenged, but recent studies confirm many of Hanson’s claims (for a more up-to-date study see Ilaria Ramelli’s The Christian Doctrine of Apokatastasis). (WikiPedia)

In his book Universalism The Prevailing Doctrine Of The Christian Church During Its First Five Hundred Years (1899), Hanson concluded that:

(1) During the First Century the primitive Christians did not dwell on matters of eschatology, but devoted their attention to apologetics; they were chiefly anxious to establish the fact of Christ’s advent, and of its blessings to the world. Possibly the question of destiny was an open one, till Paganism and Judaism introduced erroneous ideas, when the New Testament doctrine of the apokatastasis was asserted, and universal restoration became an accepted belief, as stated later by Clement and Origen, A.D. 180-230. 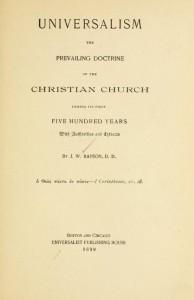 (2) The Catacombs give us the views of the unlearned, as Clement and Origen state the doctrine of scholars and teachers. Not a syllable is found hinting at the horrors of Augustinianism, but the inscription on every monument harmonizes with the Universalism of the early fathers.

(3) Clement declares that all punishment, however severe, is purificatory; that even the “torments of the damned” are curative. Origen explains even Gehenna as signifying limited and curative punishment, and both, as all the other ancient Universalists, declare that “everlasting” (aionion) punishment, is consonant with universal salvation. So that it is no proof that other primitive Christians who are less explicit as to the final result, taught endless punishment when they employ the same terms.

(4) Like our Lord and his Apostles, the primitive Christians avoided the words with which the Pagans and Jews defined endless punishment aidios or adialeipton timoria (endless torment), a doctrine the latter believed, and knew how to describe; but they, the early Christians, called punishment, as did our Lord, kolasis aionios, discipline, chastisement, of indefinite, limited duration.

(5) The early Christians taught that Christ preached the Gospel to the dead, and for that purpose descended into Hades. Many held that he released all who were in ward. This shows that repentance beyond the grave, perpetual probation, was then accepted, which precludes the modern error that the soul’s destiny is decided at death.

(6) Prayers for the dead were universal in the early church, which would be absurd, if their condition is unalterably fixed at the grave.

(7) The idea that false threats were necessary to keep the common people in check, and that the truth might be held esoterically, prevailed among the earlier Christians, so that there can be no doubt that many who seem to teach endless punishment, really held the broader views, as we know the most did, and preached terrors pedagogically.

(8) The first comparatively complete systematic statement of Christian doctrine ever given to the world was by Clement of Alexandria, A.D. 180, and universal salvation was one of the tenets.

(9) The first complete presentation of Christianity as a system was by Origen (A.D. 220) and universal salvation was explicitly contained in it.

(11) Universalism was generally believed in the best centuries, the first three, when Christians were most remarkable for simplicity, goodness and missionary zeal.

(13) Not a writer among those who describe the heresies of the first three hundred years intimates that Universalism was then a heresy, though it was believed by many, if not be a majority, and certainly by the greatest of the fathers.

(14) Not a single creed for five hundred years expresses any idea contrary to universal restoration, or in favor of endless punishment.

(15) With the exception of the arguments of Augustine (A.D. 420), there is not an argument known to have been framed against Universalism for at least four hundred years after Christ, by any of the ancient fathers.

(16) While the councils that assembled in various parts of Christendom, anathematized every kind of doctrine supposed to be heretical, no oecumenical council, for more than five hundred years, condemned Universalism, though it had been advocated in every century by the principal scholars and most revered saints.

(17) As late as A.D. 400, Jerome says “most people” (plerique). and Augustine “very many” (quam plurimi), believed in Universalism, notwithstanding that the tremendous influence of Augustine, and the mighty power of the semi-pagan secular arm were arrayed against it.

(18) The principal ancient Universalists were Christian born and reared, and were among the most scholarly and saintly of all the ancient saints.

(19) The most celebrated of the earlier advocates of endless punishment were heathen born, and led corrupt lives in their youth. Tertullian one of the first, and Augustine, the greatest of them, confess to having been among the vilest.

(20) The first advocates of endless punishment, Minucius Felix, Tertullian and Augustine, were Latins, ignorant of Greek, and less competent to interpret the meaning of Greek Scriptures than were the Greek scholars.

(21) The first advocates of Universalism, after the Apostles, were Greeks, in whose mother-tongue the New Testament was written. They found their Universalism in the Greek Bible. Who should be correct, they or the Latins?

(22) The Greek Fathers announced the great truth of universal restoration in an age of darkness, sin and corruption. There was nothing to suggest it to them in the world’s literature or religion. It was wholly contrary to everything around them. Where else could they have found it, but where they say they did, in the Gospel?

(23) All ecclesiastical historians and the best Biblical critics and scholars agree to the prevalence of Universalism in the earlier centuries.

(24) From the days of Clement of Alexandria to those of Gregory of Nyssa and Theodore of Mopsuestia (A.D. 180-428), the great theologians and teachers, almost without exception, were Universalists. No equal number in the same centuries were comparable to them for learning and goodness.

(25) The first theological school in Christendom, that in Alexandria, taught Universalism for more than two hundred years.

(26) In all Christendom, from A.D. 170 to 430, there were six Christian schools. Of these four, the only strictly theological schools, taught Universalism, and but one endless punishment.

(27) The three earliest Gnostic sects, the Basilidians, the Carpocratians and the Valentinians (A.D. 117-132) are condemned by Christian writers, and their heresies pointed out, but though they taught Universalism, that doctrine is never condemned by those who oppose them. Irenaeus condemned the errors of the Carpocratians, but does not reprehend their Universalism, though he ascribes the doctrine to them.

(28) The first defense of Christianity against Infidelity (Origen against Celsus) puts the defense on Universalistic grounds. Celsus charged the Christians’ God with cruelty, because he punished with fire. Origen replied that God’s fire is curative; that he is a “Consuming Fire,” because he consumes sin and not the sinner.

(29) Origen, the chief representative of Universalism in the ancient centuries, was bitterly opposed and condemned for various heresies by ignorant and cruel fanatics. He was accused of opposing Episcopacy, believing in pre-existence, etc., but never was condemned for his Universalism. The very council that anathematized “Origenism” eulogized Gregory of Nyssa, who was explicitly a Universalist as was Origen. Lists of his errors are given by Methodius, Pamphilus and Eusebius, Marcellus, Eustathius and Jerome, but Universalism is not named by one of his opponents. Fancy a list of Ballou’s errors and his Universalism omitted; Hippolytus (A.D. 320) names thirty-two known heresies, but Universalism is not mentioned as among them. Epiphanius, “the hammer of heretics,” describes eighty heresies, but he does not mention universal salvation, though Gregory of Nyssa, an outspoken Universalist, was, at the time he wrote, the most conspicuous figure in Christendom.

(30) Justinian, a half-pagan emperor, who attempted to have Universalism officially condemned, lived in the most corrupt epoch of the Christian centuries. He closed the theological schools, and demanded the condemnation of Universalism by law; but the doctrine was so prevalent in the church that the council refused to obey his edict to suppress it. Lecky says the age of Justinian was “the worst form civilization has assumed.”

(31) The first clear and definite statement of human destiny by any Christian writer after the days of the Apostles, includes universal restoration, and that doctrine was advocated by most of the greatest and best of the Christian Fathers for the first five hundred years of the Christian Era.

In one word, a careful study of the early history of the Christian religion, will show that the doctrine of universal restoration was least prevalent in the darkest, and prevailed most in the most enlightened, of the earliest centuries–that it was the prevailing doctrine in the Primitive Christian Church.