Hannah Tatum Whitall Smith (1832-1911) was a lay speaker and author in the Holiness movement in the United States and the Higher Life movement in the United Kingdom of Great Britain and Ireland. She was also active in the Women’s suffrage movement and the Temperance movement. In her book The Unselfishness of God and How I Discovered It she explains how she came to embrace the belief in the final restitution of all things. The popular book has been reprinted many times, but often without the last three chapters, that contains the whole point of the book. Below is an excerpt from chapter 22: 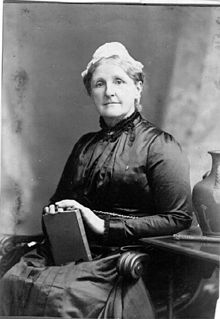 “I saw all this that day on the tram-car on Market street, Philadelphia –not only thought it, or hoped it, or even believed it–but knew it. It was a Divine fact. And from that moment I have never had one questioning thought as to the final destiny of the human race. God is the Creator of every human being, therefore He is the Father of each one, and they are all His children; and Christ died for every one, and is declared to be “the propitiation not for our sins only, but also for the sins of the whole world” (1 John 2:2). However great the ignorance therefore, or however grievous the sin, the promise of salvation is positive and without limitations. If it is true that “by the offense of one judgment came upon all men to condemnation,” it is equally true that “by the righteousness of one the free gift came upon all men unto justification of life.” To limit the last “all men” is also to limit the first. The salvation is absolutely equal to the fall. There is to be a final “restitution of all things,” when “at the name of Jesus every knee shall bow, of things in heaven, and things on earth, and things under the earth, and every tongue shall confess that Jesus Christ is Lord to the glory of God the Father.” Every knee, every tongue-words could not be more embracing. The how and the when I could not see; but the one essential fact was all I needed-somewhere and somehow God was going to make every thing right for all the creatures He had created. My heart was at rest about it forever.

I hurried home to get hold of my Bible, to see if the magnificent fact I had discovered could possibly have been all this time in the Bible, and I had not have seen it; and the moment I entered the house, I did not wait to take off my bonnet, but rushed at once to the table where I always kept my Bible and Concordance ready for use, and began my search. Immediately the whole Book seemed to be illuminated. On every page the truth concerning the “times of restitution of all things” of which the Apostle Peter says “God Hath spoken by the mouth of all His holy prophets since the world began,” shone forth, and no room was left for questioning. I turned greedily from page to page of my Bible, fairly laughing aloud for joy at the blaze of light that illuminated it all. It became a new book. Another skin seemed to have been peeled off every text, and my Bible fairly shone with a new meaning. I do not say with a different meaning, for in no sense did the new meaning contradict the old, but a deeper meaning, the true meaning, hidden behind the outward form of words. The words did not need to be changed, they only needed to be understood; and now at last I began to understand them.”