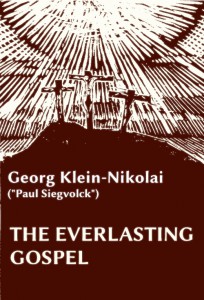 Georg Klein-Nicolai seems to have been in no doubt that it is the will of God to restore all fallen creatures. God is love, and all that he does he does out of love. God will attain this purpose, even if the creatures resist him. The belief that creatures are in all eternity capable of resisting God makes creatures stronger than God and thus opens the way to all kinds of “iniquity and atheistic mockery”, says Klein-Nicolai.

“If all punishments determined by God for the creatures, be they never so dreadful, are (when considered according to their inmost center and principle) works of divine love, it necessarily follows from hence, that even the most dreadful punishments which God, in the age or ages to come, will inflict on bad angels and men, as far as they proceed from him, are grounded on no other principle than that of love;” (The Everlasting Gospel, Ch. I)

It is only with God’s permission that creatures are allowed to resist God. The purpose is, says Klein-Nicolai, that the creatures, who will not voluntarily choose the salvation and well-being offered to them, may taste of the bitter fruits of their disobedience. As a result, the rebellious creatures will finally be conquered and thus give themselves up to their Creator, who is able to subdue all. All punishments are, in the end, redemptive.