“They will be punished with eternal destruction (olethron aionion), forever separated from the Lord and from his glorious power.” (2 Thes. 1:9, NLT)

“who shall suffer justice — destruction age-during (olethron aionion) — from the face of the Lord, and from the glory of his strength” (2 Thes. 1:9, YLT) 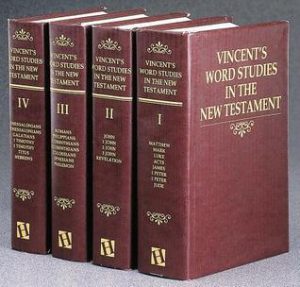 ‘Aion, transliterated aeon, is a period of longer or shorter duration, having a beginning and an end, and complete in itself. Aristotle (peri ouravou, i. 9,15) says: “The period which includes the whole time of one’s life is called the aeon of each one.” Hence it often means the life of a man, as in Homer, where one’s life (aion) is said to leave him or to consume away (Iliad v. 685; Odyssey v. 160). It is not, however, limited to human life; it signifies any period in the course of events, as the period or age before Christ; the period of the millenium; the mythological period before the beginnings of history. The word has not “a stationary and mechanical value” (De Quincey). It does not mean a period of a fixed length for all cases. There are as many aeons as entities, the respective durations of which are fixed by the normal conditions of the several entities. There is one aeon of a human life, another of the life of a nation, another of a crow’s life, another of an oak’s life. The length of the aeon depends on the subject to which it is attached.

It is sometimes translated world; world represents a period or a series of periods of time. See Matt 12:32; 13:40,49; Luke 1:70; 1 Cor 1:20; 2:6; Eph 1:21. Similarly oi aiones, the worlds, the universe, the aggregate of the ages or periods, and their contents which are included in the duration of the world. 1 Cor 2:7; 10:11; Heb 1:2; 9:26; 11:3. The word always carries the notion of time, and not of eternity. It always means a period of time. Otherwise it would be impossible to account for the plural, or for such qualifying expressions as this age, or the age to come. It does not mean something endless or everlasting. To deduce that meaning from its relation to aei is absurd; for, apart from the fact that the meaning of a word is not definitely fixed by its derivation, aei does not signify endless duration. When the writer of the Pastoral Epistles quotes the saying that the Cretans are always (aei) liars (Tit. 1:12), he surely does not mean that the Cretans will go on lying to all eternity. See also Acts 7:51; 2 Cor. 4:11; 6:10; Heb 3:10; 1 Pet. 3:15. Aei means habitually or continually within the limit of the subject’s life. In our colloquial dialect everlastingly is used in the same way. “The boy is everlastingly tormenting me to buy him a drum.”

In the New Testament the history of the world is conceived as developed through a succession of aeons. A series of such aeons precedes the introduction of a new series inaugurated by the Christian dispensation, and the end of the world and the second coming of Christ are to mark the beginning of another series. Eph. 1:21; 2:7; 3:9,21; 1 Cor 10:11; compare Heb. 9:26. He includes the series of aeons in one great aeon, ‘o aion ton aionon, the aeon of the aeons (Eph. 3:21); and the author of the Epistle to the Hebrews describe the throne of God as enduring unto the aeon of the aeons (Heb 1:8). The plural is also used, aeons of the aeons, signifying all the successive periods which make up the sum total of the ages collectively. Rom. 16:27; Gal. 1:5; Philip. 4:20, etc. This plural phrase is applied by Paul to God only.

Words which are habitually applied to things temporal or material cannot carry in themselves the sense of endlessness. Even when applied to God, we are not forced to render aionios everlasting. Of course the life of God is endless; but the question is whether, in describing God as aionios, it was intended to describe the duration of his being, or whether some different and larger idea was not contemplated. That God lives longer then men, and lives on everlastingly, and has lived everlastingly, are, no doubt, great and significant facts; yet they are not the dominant or the most impressive facts in God’s relations to time. God’s eternity does not stand merely or chiefly for a scale of length. It is not primarily a mathematical but a moral fact. The relations of God to time include and imply far more than the bare fact of endless continuance. They carry with them the fact that God transcends time; works on different principles and on a vaster scale than the wisdom of time provides; oversteps the conditions and the motives of time; marshals the successive aeons from a point outside of time, on lines which run out into his own measureless cycles, and for sublime moral ends which the creature of threescore and ten years cannot grasp and does not even suspect.

There is a word for everlasting if that idea is demanded. That aiodios occurs rarely in the New Testament and in LXX does not prove that its place was taken by aionios. It rather goes to show that less importance was attached to the bare idea of everlastingness than later theological thought has given it. Paul uses the word once, in Rom. 1:20, where he speaks of “the everlasting power and divinity of God.” In Rom. 16:26 he speaks of the eternal God (tou aioniou theou); but that he does not mean the everlasting God is perfectly clear from the context. He has said that “the mystery” has been kept in silence in times eternal (chronois aioniois), by which he does not mean everlasting times, but the successive aeons which elapsed before Christ was proclaimed. God therefore is described as the God of the aeons, the God who pervaded and controlled those periods before the incarnation. To the same effect is the title ‘o basileus ton aionon, the King of the aeons, applied to God in 1 Tim. 1:17; Rev. 15:3; compare Tob. 13:6, 10. The phrase pro chronon aionion, before eternal times (2 Tim. 1:9; Tit. 1:2), cannot mean before everlasting times. To say that God bestowed grace on men, or promised them eternal life before endless times, would be absurd. The meaning is of old, as Luke 1:70. The grace and the promise were given in time, but far back in the ages, before the times of reckoning the aeons.

Zoe aionios eternal life, which occurs 42 times in N. T., but not in LXX, is not endless life, but life pertaining to a certain age or aeon, or continuing during that aeon. I repeat, life may be endless. The life in union with Christ is endless, but the fact is not expressed by aionios. Kolasis aionios, rendered everlasting punishment (Matt. 25:46), is the punishment peculiar to an aeon other then that in which Christ is speaking. In some cases zoe aionios does not refer specifically to the life beyond time, but rather to the aeon or dispensation of Messiah which succeeds the legal dispensation. See Matt. 19:16; John 5:39. John says that zoe aionios is the present possession of those who believe on the Son of God, John 3:36; 5:24; 6:47,54. The Father’s commandment is zoe aionios, John 1250; to know the only true God and Jesus Christ is zoe aionios. John 17:3.

Bishop Westcott very justly says, commenting upon the terms used by John to describe life under different aspects: “In considering these phrases it is necessary to premise that in spiritual things we must guard against all conclusions which rest upon the notions of succession and duration. ‘Eternal life’ is that which St. Paul speaks of as ‘e outos Zoe the life which is life indeed, and ‘e zoe tou theou, the life of God. It is not an endless duration of being in time, but being of which time is not a measure. We have indeed no powers to grasp the idea except through forms and images of sense. These must be used, but we must not transfer them as realities to another order.”

Thus, while aionios carries the idea of time, though not of endlessness, there belongs to it also, more or less, a sense of quality. Its character is ethical rather than mathematical. The deepest significance of the life beyond time lies, not in endlessness, but in the moral quality of the aeon into which the life passes. It is comparatively unimportant whether or not the rich fool, when his soul was required of him (Luke 12:20), entered upon a state that was endless. The principal, the tremendous fact, as Christ unmistakably puts it, was that, in the new aeon, the motives, the aims, the conditions, the successes and awards of time counted for nothing. In time, his barns and their contents were everything; the soul was nothing. In the new life the soul was first and everything, and the barns and storehouses nothing. The bliss of the sanctified does not consist primarily in its endlessness, but in the nobler moral conditions of the new aeon, the years of the holy and eternal God. Duration is a secondary idea. When it enters it enters as an accompaniment and outgrowth of moral conditions.

In the present passage it is urged that olethron destruction points to an unchangeable, irremediable, and endless condition. If this be true, if olethros is extinction, then the passage teaches the annihilation of the wicked, in which case the adjective aionios is superfluous, since extinction is final, and excludes the idea of duration. But olethros does not always mean destruction or extinction. Take the kindred verb apollumi to destroy, put an end to, or in the middle voice, to be lost, to perish. Peter says “the world being deluged with water, perished (apoleto, 2 Pet. 3:6); but the world did not become extinct, it was renewed. In Heb. 1:11,12, quoted from Ps. 102, we read concerning the heavens and the earth as compared with the eternity of God, “they shall perish” (apolountai). But the perishing is only preparatory to change and renewal. “They shall be changed” (allagesontai). Compare Isa. 51:6,16; 65:22; 2 Pet. 3:13; Rev. 21:1. Similarly, “the Son of man came to save that which was lost” (apololos), Luke 19:10. Jesus charged his apostles to go to the lost (apololota) sheep of the house of Israel, Matt. 10:6, compare 15:24, “He that shall lose (apolese) his life for my sake shall find it,” Matt. 16:25. Compare Luke 15:6,9,32.

In this passage, the word destruction is qualified. It is “destruction from the presence of the Lord and from the glory of his power,” at his second coming, in the new aeon. In other words, it is the severance, at a given point of time, of those who obey not the gospel from the presence and the glory of Christ. Aionios may therefore describe this severance as continuing during the millenial aeon between Christ’s coming and the final judgment; as being for the wicked prolonged throughout that aeon and characteristic of it, or it may describe the severance as characterising or enduring through a period or aeon succeeding the final judgment, the extent of which period is not defined. In neither case is aionios, to be interpreted as everlasting or endless.