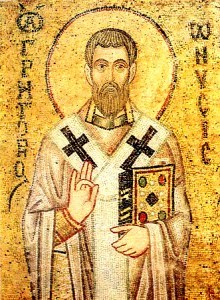 Gregory of Nyssa, also known as Gregory Nyssen (Greek: Γρηγόριος Νύσσης; c. 335 – c. 395), was bishop of Nyssa from 372 to 376 and from 378 until his death. He is venerated as a saint in Roman Catholicism, Eastern Orthodoxy, Oriental Orthodoxy, Lutheranism, and Anglicanism. Gregory, his brother Basil of Caesarea, and Gregory of Nazianzus are collectively known as the Cappadocian Fathers (Wikipedia).

Gregory affirmed that in the end “No being created by God will fall outside the Kingdom of God” and that “No being will remain outside the number of the saved” (In Illud 14,21), and that “all, thanks to the union with one another, will be joined in communion with the Good, in Jesus Christ Our Lord” (On the Song of Songs XV).

“When all that is evil has disappeared, “they will know”, says Scripture, “that God is the Lord of Jacob and of the ends of the earth.” Indeed, since there will be no evil left anywhere, the Lord will be the absolute sovereign of all the earth, after evil, which now reigns over most people, will have been wiped out.” (On Psalm 59, quoted from Ramelli 2013, p. 399)

“I do not doubt that there will be one and the same race, made up by all, when all of us will constitute the one body of Christ, formed with one and the same stamp, when the image of God will shine forth in all to the same degree.” (De mort. 20)

“But the only-begotten Son of God himself resurrects the human being that is united to himself, by separating the soul from the body and then uniting them again. In this way, the common salvation of human nature is achieved. This is why he is also called the Initiator of Life. Indeed, the Only-Begotten God, by dying for us and rising again, has reconciled the universe to himself, ransoming by all means of his flesh and blood, as war prisoners, all of us who participate in him through a bond of blood.” (Contr. c. Apoll 154)

“Again, [Paul] speaks of the subjection of all men to God, when we all, being united to one another by the faith, become one body of the Lord who is in all, as the subjection of the Son to the Father, when the adoration paid to the Son by all things with one accord, by things in heaven, and things on earth, and things under the earth, redounds to the glory of the Father; as Paul says elsewhere, “To Him every knee shall bow, of things in heaven, and things in earth, and things under the earth, and every tongue shall confess that Jesus Christ is Lord, to the glory of God the Father.” For when this takes places, the mighty wisdom of Paul affirms that the Son, who is in all, is subject to the Father by virtue of the subjection of those in whom He is.” (Against Eunomius, Book II)

“For the subjection of men to God is salvation for those who are so made subject, according to the voice of the prophet, who says that his soul is subject to God, since of Him cometh salvation by subjection, so that subjection is the means of averting perdition. As therefore the help of the healing art is sought eagerly by the sick, so is subjection by those who are in need of salvation. (Against Eunomius, Book II)

“[…]after the evil of the [human] nature which is now mingled and united with it has been removed through long periods of time, when the restoration of those now lying dead in evil to the original state has come to pass, there will be a harmonious thanksgiving from all creation, even from those who needed no purification in the first place. The great mystery of the divine incarnation grants these and other such things. For through those things which were mingled with human nature – birth, rearing, growth, even to the extent of going through the experience of death – he accomplished all the aforementioned things, both freeing humanity from evil and healing even the originator of evil himself. For the purification of moral disease is the healing of illness, even if it is painful.” (Cat. or. 26)

“[God’s] end is one, and one only; it is this: when the complete whole of our race shall have been perfected from the first man to the last—some having at once in this life been cleansed from evil, others having afterwards in the necessary periods been healed by the Fire, others having in their life here been unconscious equally of good and of evil—to offer to every one of us participation in the blessings which are in Him, which, the Scripture tells us, ‘eye hath not seen, nor ear heard,’ nor thought ever reached.” (On the Soul and the Resurrection)