Titus Flavius Clemens (Greek: Κλήμης ὁ Ἀλεξανδρεύς; c. 150 – c. 215), known as Clement of Alexandria to distinguish him from the earlier Clement of Rome, was a Christian theologian who taught at the Catechetical School of Alexandria. 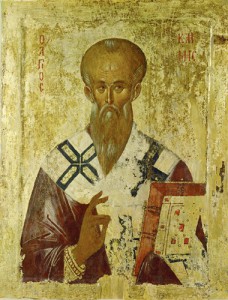 “For all things are ordered both universally and in particular by the Lord of the universe, with a view to the salvation of the universe. But needful corrections, by the goodness of the great, overseeing judge, through the attendant angels, through various prior judgments, through the final judgment, compel even those who have become more callous to repent.”

“So he saves all; but some he converts by penalties, others who follow him of their own will, and in accordance with the worthiness of his honor, that every knee may be bent to him of celestial, terrestrial and infernal things (Phil. 2:10), that is angels, men, and souls who before his advent migrated from this mortal life.”

“For there are partial corrections (padeiai) which are called chastisements (kolasis), which many of us who have been in transgression incur by falling away from the Lord’s people. But as children are chastised by their teacher, or their father, so are we by Providence. But God does not punish (timoria) for punishment (timoria) is retaliation for evil. He chastises, however, for good to those who are chastised collectively and individually.” (Strom, VII, ii; Pedag. I, 8; on I John ii, 2)

J.W. Hanson wrote on Clement in his Universalism The Prevailing Doctrine Of The Christian Church During Its First Five Hundred Years (1899):

“This important passage is very instructive in the light it sheds on the usage of Greek words. The word from which “corrections” is rendered is the same as that in Hebrews 12:9, “correction” “chastening” (paideia); “chastisement” is from kolasis, translated “punishment” in Matt. 25:46, and “punishment” is timoria, with which Josephus defined punishment, but a word our Lord never employs, and which Clement declares that God never inflicts.

“The divine nature is not angry but is at the farthest from it, for it is an excellent ruse to frighten in order that we may not sin. Nothing is hated by God.”(2) So that even if aionios (Matt. 25:46) meant endless duration, Clement would argue that it was used as instruction–to restrain the sinner. It should be said, however, that Clement rarely uses aionion in connection with suffering.

Clement insists that punishment in Hades is remedial and restorative, and that punished souls are cleansed by fire. The fire is spiritual, purifying the soul. “God’s punishments are saving and disciplinary (in Hades) leading to conversion, and choosing rather the repentance than the death of the sinner, (Ezek. 18:23, 32; 33:11, etc.,) and especially since souls, although darkened by passions, when released from their bodies, are able to perceive more clearly because of their being no longer obstructed by the paltry flesh.”

He again defines the important word kolasis our Lord uses in Matt. 25:46, and shows how it differs from the wholly different word timoria used by Josephus and the Greek writers who believed in irremediable suffering. He says: “He (God) chastises the disobedient, for chastisement (kolasis) is for the good and advantage of him who is punished, for it is the amendment of one who resists; I will not grant that he wishes to take vengeance. Vengeance (timoria) is a requital of evil sent for the interest of the avenger. He (God) would not desire to avenge himself on us who teaches us to pray for those who despitefully use us (Matt. 5:44).(5) Therefore the good God punishes for these three causes: First, that he who is punished (paidenomenos) may become better than his former self; then that those who are capable of being saved by examples may be drawn back, being admonished; and thirdly, that he who is injured may not readily be despised, and be apt to receive injury. And there are two methods of correction, the instructive and the punitive,(6) which we have called the disciplinary.”

The English reader of the translations of the Greek fathers is misled by the indiscriminate rendering of different Greek words into “punish.” Timoria should always be translated “vengeance,” or “torment;” kolasis, “punishment,” and paideia “chastisement,” or “correction.”

More quotations from the Stromata:

”He is in no respect whatever the ’cause of evil. For all things are arranged with a view to the salvation of the universe by the Lord of the universe, both generally and particularly. It is then the function of the righteousness of salvation to improve everything as far as practicable. For even minor matters are arranged with a view to the salvation of that which is better, and for an abode suitable for people’s character. Now everything that is virtuous changes for the better; having as the proper cause of change the free choice of knowledge, which the soul has in its own power. But necessary corrections, through the goodness of the great overseeing Judge, both by the attendant angels, and by various acts of anticipative judgment, and by the perfect judgment, compel egregious sinners to repent.” (Str. VII 12.2-5)

“To Him is placed in subjection all the host of angels and gods; He, the paternal Word, exhibiting a the holy administration for Him who put [all] in subjection to Him. Wherefore also all men are His; some through knowledge, and others not yet so; and some as friends, some as faithful servants, some as servants merely.” (Str. VII)

“either the Lord does not care for all men; and this is the case either because He is unable (which is not to be thought, for it would be a proof of weakness), or because He is unwilling, which is not the attribute of a good being. And He who for our sakes assumed flesh capable of suffering, is far from being luxuriously indolent. Or He does care for all, which is befitting for Him who has become Lord of all. For He is Saviour; not [the Saviour] of some, and of others not. But in proportion to the adaptation possessed by each, He has dispensed His beneficence both to Greeks and Barbarians, even to those of them that were predestinated, and in due time called, the faithful and elect. Nor can He who called all equally, and assigned special honours to those who have believed in a specially excellent way, ever envy any. Nor can He who is the Lord of all, and serves above all the will of the good and almighty Father, ever be hindered by another. But neither does envy touch the Lord, who without beginning was impassible; nor are the things of men such as to be envied by the Lord. But it is another, he whom passion hath touched, who envies. And it cannot be said that it is from ignorance that the Lord is not willing to save humanity, because He knows not how each one is to be cared for. For ignorance applies not to the God who, before the foundation of the world, was the counsellor of the Father. For He was the Wisdom “in which” the Sovereign God “delighted.” For the Son is the power of God, as being the Father’s most ancient Word before the production of all things, and His Wisdom. He is then properly called the Teacher of the beings formed by Him. Nor does He ever abandon care for men, by being drawn aside from pleasure, who, having assumed flesh, which by nature is susceptible of suffering, trained it to the condition of impassibility. And how is He Saviour and Lord, if not the Saviour and Lord of all?” (Str. VII)

”God’s punishments are saving and disciplinary, leading to conversion, and choosing rather the repentance than the death of a sinner” (Str. VI)

“But punishment does not avail to him who has sinned, to undo his sin, but that he may sin no more, and that no one else fall into the like. Therefore the good God corrects for these three causes: First, that he who is corrected may become better than his former self; then that those who are capable of being saved by examples may be driven back, being admonished; and thirdly, that he who is injured may not be readily despised, and be apt to receive injury. And there are two methods of correction—the instructive and the punitive, which we have called the disciplinary. It ought to be known, then, that those who fall into sin after baptism are those who are subjected to discipline; for the deeds done before are remitted, and those done after are purged.” (Str. IV)