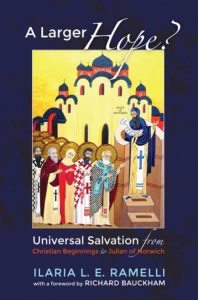 For those who does not have the time or cannot afford Dr. Ilaria Ramelli’s massive work The Christian Doctrine of Apokatastasis, there is now a good alternative. In A Larger Hope?, Ramelli presents the classical doctrine of the restoration of all things in an accessible manner.

See also: A Larger Hope?,  Volume 2: Universal Salvation from the Reformation to the Nineteenth Century

From the publisher’s description of the book:

“In the minds of some, universal salvation is a heretical idea that was imported into Christianity from pagan philosophies by Origen (c.185–253/4). Ilaria Ramelli argues that this picture is completely mistaken. She maintains that Christian theologians were the first people to proclaim that all will be saved and that their reasons for doing so were rooted in their faith in Christ. She demonstrates that, in fact, the idea of the final restoration of all creation (apokatastasis) was grounded upon the teachings of the Bible and the church’s beliefs about Jesus’ total triumph over sin, death, and evil through his incarnation, crucifixion, resurrection, and ascension.

Ramelli traces the Christian roots of Origen’s teaching on apokatastasis. She argues that he was drawing on texts from Scripture and from various Christians who preceded him, theologians such as Bardaisan, Irenaeus, and Clement. She outlines Origen’s often-misunderstood theology in some detail and then follows the legacy of his Christian universalism through the centuries that followed. We are treated to explorations of Origenian universal salvation in a host of Christian disciples, including Athanasius, Didymus the Blind, the Cappadocian fathers, Evagrius, Maximus the Confessor, John Scotus Eriugena, and Julian of Norwich.

Get it here: Wipf & Stock Publishers