Eschatology in the Thought of Gregory of Nyssa and Karl Rahner

From the book description: 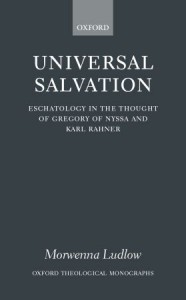 “For nearly two thousand years Paul’s suggestion at the end of 1 Corinthians 15 that God will be ‘all in all’ has appealed to those who hold a ‘wider hope’ that eventually no person will be lost from God’s love. Clearly, such hope for universal salvation is at variance with most Christian tradition, which has emphasized the possibility, or certainty, of eternal hell. However, a minority of Christian thinkers have advocated the idea and it has provoked much debate in the course of the twentieth century. Responding to this interest, Morwenna Ludlow compares and assesses the arguments for universal salvation by Gregory of Nyssa and Karl Rahner – two influential theologians from very different eras who are less well known for their eschatological views. In this book Dr Ludlow gives an assessment of early Christian eschatology and its effect on modern theology by examining some fundamental questions. Does universal salvation constitute a ‘second tradition’ of eschatology and how has that tradition developed? What can we learn from Patristic writers such as Gregory of Nyssa? How does one approach Christian eschatology in a modern context?”